Jacksons in the running to support Headway again

Fuelled by the success of this summer’s big fundraiser, the team at Jacksons are gearing up to support Headway Jersey’s charity run again next year.

Hundreds took to the roads of St. Brelade and St Peter to race in the new 10k run for adults, along with the 3k run for children which took part on Les Quennevais track on Sunday 23rd June and helped raise £5,300 for islanders affected by a brain injury and their carers.

A selection of Jacksons’ prestigious cars lined the course which started at Les Quennevais. 200 adults ran towards St Peter, past the Jacksons showroom, St George’s School, St Peter’s Parish Hall and St Peter’s FC before finishing back at the sports centre.

Jacksons test drove the course for themselves with their own team running while their non-runners helped marshal the race.

Sam Maher came home first in the mens’ race with a winning time and new PB of 32.56, while Lucy Niemz, a runner from the UK was the first lady across the finish line in 39.55.

Headway member Paul Sharkey hand crafted stunning bespoke trophies especially for the event from a variety of car parts, creating a unique memento for the individual and team winners in the race. Meanwhile all those taking part in the 10k race were given a tee shirt and medal.

Commenting on the sponsorship, Andrew Searle, Head of Business at Jacksons said, “We were delighted to support this exciting new race and a fantastic local charity that provides life changing services to so many islanders. We are committed to playing an active role in the community and we had a great team who got involved and really enjoyed the day! We’re all looking forward to doing it all again next year!”

Bryce Alford, Headway Jersey’s Fundraising and Events Manager said, “The feedback we have had from the race has been excellent. Runners said the support from the large number of marshals along the route was really appreciated. The race had a ‘big event feel’ with a race village atmosphere which was really brought to life by the Jacksons vehicles at the finish and the mobile display unit which acted as the podium for the presentations. We would also like to thank the Parishes of St. Brelade and St. Peter for their generosity in allowing us to hold the race.” 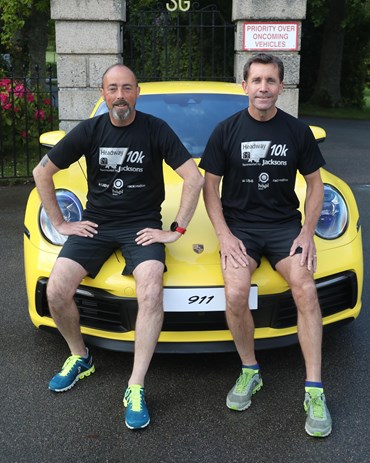 The charity plans to stage next year’s event at the end of June.

Headway Jersey has over 150 survivors of brain injury registered with them as members and up to 70 who access their services on a weekly basis.

More information on Headway Jersey
It costs Headway £350k a year to provide all services, with only £29k per year provided by the Government of Jersey.

Headway Jersey has grown from very small beginnings in 1997 and awareness of the work the charity does for those who are affected by brain injuries has increased greatly over this time. The Headway Centre is now seeing an increase in the number of referrals and the charity currently
has over 150 survivors of brain injury registered with as members.

Some members require occasional support, however up to 70 members access Headway’s services on a weekly basis. These services are an essential lifeline for members and also provide support and respite to families and carers who need it most and include neuro-physiotherapy, cognitive therapy and advocacy amongst many others.